Just how feasible is it to make a shot at 2700 yards?
A British sniper, Corporal Craig Harrison, recently set a new world record in Afghanistan by dropping a Taliban fighter at that distance plus 100 feet, besting the previous record set 8 years ago by Canadian Army sniper Robert Furlong, also in Afghanistan.

I thought you’d find it interesting to see what goes into making such an extreme-range shot. Furlong used a McBros Tac 50 rifle while Harrison fired an AI .338 Lapua Magnum. I’ve fired both rifles, along with a host of .50 calibers and .338 Lapua Magnums, and personally own a Savage Model 110 BA in .338 Lapua Magnum. To calculate .338 Lapua Mag. exterior ballistics I’m using the Sierra Infinity V6 software for Black Hills Ammo’s excellent 300-grain load.

Can You Even See a Target at 2700 yards?
From time to time I’ve heard claims that Marine Sniper Carlos Hathcock could not possibly have made his famous Vietnam War 2500-yard shot because his target scope did not have enough magnification to see a target that far away -- and these more recent record shots were 200 yards further. Even among accomplished riflemen I’ve heard doubts you can even see a human through a scope at 1-1/2 miles. That’s where I began my research. Checking maps, I found a nearby lake that measured 1-1/2 miles, or 7920 feet, from shore-to-shore. Mounting a 10x fixed magnification scope on a tripod, through the scope I photographed a house on the far shore. Actually, the house was about 50 yards beyond the shoreline, making the distance slightly further than Furlong’s shot, and just short of British sniper Harrison’s shot. As this photo proves, even at 10x you can see a human-sized target and, as demonstrated in the blown up image, below, you could even determine whether the human was armed. 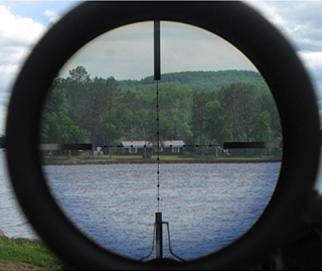 This is how a house looks at 2750 yards, viewed at 10x through a mil-dot reticle.

magnified reticle view demonstrates that a human’s height is about 2/3rd of a mil.


Inherent Accuracy of Rifle and Ammunition
Having seen that, indeed, a target can be seen through a scope at extreme range, how predictable is it that a shot could strike a target so far away? Let’s consider group-size against target-size at 2700 yards. A quality rifle firing quality ammo, using a quality scope, should shoot 1 MOA or better – meaning one inch or less at 100 yards. A one-inch group will have widened with distance, so that at 2700 yards, it has become 27 inches. Since a torso-sized target measures approximately 18 inches wide and 36-inches high, the 27-inch group is 9 inches wider than the target, but well within the 36-inch vertical area. Roughly, therefore, it could be said that simply looking at a one MOA group size, there’s about a 70% chance of striking the target at 2700 yards. If the rifle were grouping better, say 7/10th of an inch, or 0.7 MOA, its 2700-yard group would measure 18.9 inches – and in that case, assuming mechanical perfection and a perfect shooter with no consideration for crosswinds – the probability of a hit is nearly 100%. Interestingly, in all three of these shooting situations – Carlos Hathcock, Robert Furlong and Craig Harrison – the snipers did not score hits with their first round. Fortunately for them, at such extreme range an opponent cannot usually hear the muzzle blast and initially may not even realize he’s under fire, making follow-on shots possible. Interestingly, it takes 5.7 seconds for the .338 bullet to reach its target at 2700 yards.

Does Any Scope Have Enough Elevation to Reach 2700 Yards?
Here’s one aspect that the critics have correct – I am unaware of any scope made anywhere in the world with enough elevation to make a 2700-yard shot. Even with a 500-yard zero, the Black Hills projectile will impact 5,311 inches low at 2700 feet. Since one Minute of Angle equals 27 inches at 2700 yards, this means a shooter needs 196 MOA of elevation to hit at that distance. (5311 inches divided by 27 = 196 MOA) The most elevation I’ve come across on any scope is 140 MOA, which is the max elevation on the Millett LRS scope. However, that leaves you 56 Minutes short. But mount that scope on a 20 MOA base – which I have on my Savage .338 Lapua -- and you now have a total of 160 MOA – yet you’re still 36 MOA low. What then? With the LRS scope’s Mil-Dot bar reticle, you can squeeze out another 35 MOA by holding 5 mils over the target. Amazingly, you now are within 1 MOA of that incredible elevation. So, hold just a hair higher – and you have enough elevation! Corp. Harrison, who made the 2700-yard shot, told reporters, “I…aimed for extreme range of the weapon.” There’s no question -- he had to.

An Accurate Range Estimate
No less important than accuracy and sufficient elevation is an accurate range estimate – in fact, at such an extreme distance, 1-1/2 miles, a correct range estimate is crucial. In all three cases – Hathcock, Furlong and Harrison – their targets were beside or on prominent landmarks. In Hathcock’s case, it was a Viet Cong soldier beside a stream, while Furlong and Harrison fired at Taliban on facing ridgelines. A careful map analysis, alone, could have yielded a solid range estimate. What about ranging on other terrain? Manual and mental range estimation techniques – like the appearance of objects or dividing the distance into football-field lengths – are much too inaccurate for so great a distance. That leaves ranging with a laser. My Bushnell Fusion binoculars offer a maximum range of 1600 yards – great for most shooting -- while the military Vector laser binoculars only goes to 2000 meters or 2200 yards. Only the most powerful military lasers can reach to 2700 and, aside from their bulk, weight and cost ($13,000), they must be aimed with considerable precision to range accurately. As I have taught students in the past, “Aim your laser as carefully as you aim your rifle,” for best results. Indeed, earlier this year I was talking to a Special Ops Afghanistan vet who told me he had difficulty holding his laser on a truck at 2700 yards, much less on an individual enemy combatant. Steadiness is essential. Some laser rangefinders are compatible with the 1:20 coarse thread found on camera tripods, including my Bushnell Elite 1500 and Scout 1000. If no tripod is available, steady the laser on sandbags or whatever you have at hand – and laze the target several times to confirm that your beam is on the target and not something closer or further. And this brings us to an appreciation for the effect of even tiny errors at so great a distance. What if you are just 25 yards off? At 2700 yards, that .338 Lapua Magnum bullet’s arc is so steep that a 25-yard range estimation error will cause the projectile to impact TEN FEET short or beyond the target. 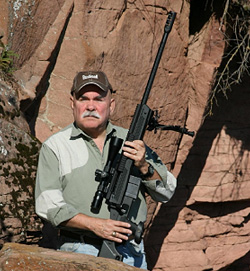 The Plunging Angle of Descent
But that’s not all. Just like firing downhill, at extreme distances a bullet’s steep plunge reduces the relative size of a target. Think of it this way: Let’s say you’re firing at a target at 100 yards which measures 36 inches high by 18 inches wide, or 648 square inches. At 300 yards or less your bullet flies fairly flat, so the target offers its entire 648-square-inch frontal area for impact. But when firing at 2700 yards, the angle of your bullet’s arc becomes very steep, so that, in relative terms, the impact area shrinks considerably – I’d say, with the bullet plunging down at 45 degrees, in relative terms that 648 square inches has shrunk by nearly one-half.

Wind Compensation
Fortunately for Corp. Harrison, wind was not an issue for his shot. As he told the London Times, “Conditions were perfect – no wind, mild weather, clear visibility.” At so great a distance, even a mild wind might make a shot impossible, and traveling so far, that bullet may have to pass through multiple winds of varying direction and velocity. But say there’s just one wind and it’s only 5 miles-per-hour. At 2700 yards a 5 MPH, 90-degree crosswind requires 244 inches of right or left compensation. If you were to dial that on a windage knob, that’s not too bad – only 9 MOA or 36 clicks on a ¼ MOA target knob. If you needed to fire faster and used the horizontal mil scale to hold right or left, you would hold exactly 2.5 mils – quite do-able. However, rarely would a sniper encounter in mountain country such ideal conditions as no wind, or a consistent, single wind. That’s where opportunity, or luck, enter the picture.

The Realm of Exotic Effects
When shooting beyond 1000 yards, long-range shooters begin to encounter exotic effects that are not an issue at closer ranges. The more common and best understood is Bullet Drift. A lot of attention is paid to bullet velocity but that bullet is also spinning, and at a considerable rate. Our Black Hills .338 Lapua Mag. projectile, with a muzzle velocity of 2800 FPS, exiting a barrel with a 1:12 rate-of-twist, is spinning at 168,000 RPMs. By the time the bullet has traveled 1000 yards, that tremendous rotation will cause the bullet to drift slightly in the direction it rotates – roughly one Minute of Angle. The only way to predict this effect at greater ranges is either to have tested a rifle and its load at those distances or to employ a reliable ballistic computer. In most cases, I suspect that snipers make their best guess and shoot. Less understood and less predictable is the Coriolis Effect. This is not an aerodynamic effect, but the slight pull of earth’s rotation on a bullet, pulling it a tiny bit right or left. Seldom considered by riflemen because it’s only a concern at extreme ranges, this deviation varies according to where the shooter is located, and the direction of his fire. It’s greatest on the poles and least on the equator, and the closer a shooter is to firing directly east or west, he can minimize its impact. However, again, calculating the effect requires a ballistic computer and, I suspect, most snipers make their best guess and take the shot. The day may come when all these factors and considerations are calculated automatically for a shooter. But having seen how much goes into such an extreme-range shot, I think you’ll share my appreciation for the amount of skill, knowledge and shooting experience required for today’s snipers to make these incredible shots. They have earned the respect of riflemen everywhere.